A Dance with Rogues
Register
Don't have an account?
Sign In
Advertisement
in: Spoilers, Part Two, Underdark

The Ancient City Gates is a passage way between Underdark and the Lake of Sorrow. It suffers from a number of cave ins that have made some passages unpassable. Several hostile species call the Gates home.

According to Rizzen in a distant past, these were the gates of Maeralssin, which was much bigger then now, and occupied all the territory from it's current position to the gates. 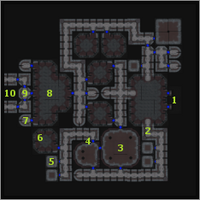