A Dance with Rogues
Register
Don't have an account?
Sign In
Advertisement
in: Changed, Otheruses, Spoilers,
and 4 more

Betancuria Castle is the residence of the King of Betancuria and where the Princess has lived most of her life, prior to the events of the story. It is on the north side of Betancuria, bordering with Betancuria North and West. Guards are posted at all entrances in order to keep everyone out. The kitchens and entrance hall can be found on the main level. The upper floors of the castle contain a number of bedrooms, including the Princess' and Shira, her maid. The basement and caverns can be found on the lowest levels. The castle has existed for more then 300 years, and has never before fallen into enemy hands, until now.

The story begins in the Princess' bedroom, with the Dhorn bursting into the castle and breaking down her door. 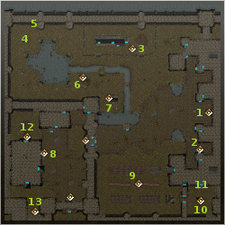