A Dance with Rogues
Register
Don't have an account?
Sign In
Advertisement
in: Part One, Betancuria, Betancuria South

Betancuria South is one of three sections of the city of Betancuria. It primarily features the harbor, but there's also a few shops, merchants, and entertainment-related establishments, and is generally not a safe place to be at night. Major structures include the One Thousand Steps Inn, the Wizard's Tower, the Mayor's Mansion, and The Swordfish. The main areas of interest are the Warehouse, found near the harbor, the One Thousand Steps Inn, near the Ranger's Guild, the Wizard's Tower on the Isle of Men, and Barich's Tavern, found near The Wildcat. There are a few empty buildings near the harbor, which are often used for unsavory purposes. Betancuria South borders with North and the road at the south gate. 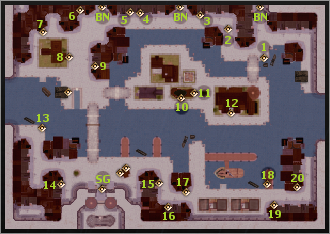