A Dance with Rogues
Register
Don't have an account?
Sign In
Advertisement
in: Spoilers, Quest, Walkthrough,
and 3 more

This is one of the seven lessons given to the Princess by Master Nathan at the beginning of the story. During the lesson the Princess is meant to learn stealth and sneaking. The quest is originally received from Nathan, but the Princess must talk with Drago to learn the details, and report to him once she has succeeded in crossing the sewers.

During the course of this quest the Princess will have encounters that are relevant to other quests as well as will meet for the first time Tony, which will allow the Princess to choose to take Tony the Tiger optional quest.

This is a mandatory quest during Chapter 1 of Part One.

Go to the Warehouse in the harbor area of Betancuria South during the day. The workers won't be there at night and you need to speak with them to get the password for the cellar. Once you know the password ("Stinkfish"), knock on the door and head downstairs. Drago Blake will be waiting for you and will ask you to use stealth to navigate the Sewers. Drago has a small store where you can buy and sell stolen items. Use the store if you need to, then head into the sewers. 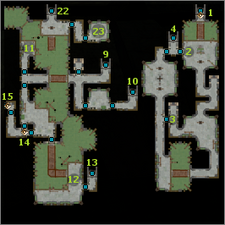 Once inside the sewers, you should enter and remain stealthy. There are a number of rats and dire rats as well as a few gelatinous cubes. There should be a torch on the path directly in front of you, but use of it will greatly reduce your stealth so it shouldn't be used or only used sparingly. The route through the initial part of the sewers should be fairly straightforward, but you may be able to bypass a large part of it by unlocking the gate to your right (#2) if your lock pick skill is high enough (or if you have some tools). If you are unable to open the door, make your way south to to the second locked gate (#3). If you are unable to open that, head further south, but watch out for the Devourer on the other side of the bridge. Make your way north to the stairs leading up (#4), which leads to the Underground River.

There are a few more rats and some Sword Spiders in the Underground River. Before entering the main chamber (#7), turn back to the north and speak with Tony Blake (#6) who is working with a few other rogues. This encounter will later trigger the Tony the Tiger quest. Now return to the hallway and make your way south, past the spiders, bashing any webs that block your path, until you reach the stairs down (#8).

You will now find yourself on a different part of the main sewers where you initially entered from the warehouse. Just to the south, around the corner, are some stairs (#10) leading up to an old cellar. There's nowhere to go here, but you can search the trash for items and rest if you need to. Head west on the main path and cross the small bridge, where you should hear some muffled voices in the distance. Continue down the hallway and turn north at the door. As you make your way north, a cutscene should play out, where a Dhorn soldier has a conversation with a mysterious individual. This conversation can be reported to Alfons and Master Nathan and is important for a future quest. Once the scene has finished, head south through the doors, then climb the ladder (#14) into the Ruined House. An old man will greet you and give you a key that unlocks other areas of the sewers with SART access points. He will also open the front door of the house, so you can enter the sewers from Betancuria South.

There are a few things you can do before finishing up in the sewers. The first is to completely explore the sewers (starting from #15), which is entirely optional, but will allow you to fully utilize SART. The second is to stop by The Family's Hideout (#13), which is something you'll have to do eventually and will introduce a few more characters and give you some additional quests.

When you're ready to finish the lesson, you can return to the Sewers after speaking with Stan in the Ruined House, follow the hallway to the west and north (near #15), and utilize SART to quickly transport yourself to the sewer entrance from the Warehouse (#1). Or you can stay topside and make your way south to the Warehouse in the harbor area of Betancuria South and into the basement. Either way, you should speak with Drago and claim your reward.

Once finished, you can return to The Bear Pit and speak with Caron about the lesson.

Continue Chapter 1 of Part One.