A Dance with Rogues
Register
Don't have an account?
Sign In
Advertisement
in: Changed, Spoilers, Quest,
and 4 more

This is one of the seven lessons given to the Princess by Master Nathan at the beginning of the story. During the lesson the Princess is supposed to learn how to set traps, but it turns out a bit differently. The quest is originally received from Nathan, but the Princess must talk with Frank Kelten at the One Thousand Steps Inn (Betancuria South) to learn the details, and report to him once she has learned her lesson.

This is a mandatory quest during Chapter 1 of Part One.

Visit Frank Kelten at the One Thousand Steps Inn (Betancuria South). He will take you on a boat trip with him and subsequently dump you in the wilderness.

The wilderness in version 1.30 compared to the previous versions is now a true wilderness. There is really only one path through, however, and the best course of action is to try and follow the path. This is easier said than done as due to the storm the light is poor even in daytime, the trees are very thick growing in places and it is easy to get disoriented.

You swim ashore on a small beach on the Great River and the only option is to follow the path up the cliff. There is a small stone tower near the top with two bugbears living in it. Depending on your abilities and how prepared you are for the trip, you can either take the two on or ignore them. It may be that at certain times of day the bugbears are out foraging.

Eventually you will pass onto the next area and find a real road, signposted to Betancuria, but the bridge over a chasm has fallen down preventing travel that way. There is an old ruined inn near the bridge, which does contain a safe place to rest if needed. The only option left is to follow the path in the "wrong" direction.

In the next area there is a split in the road. North, out of the area, is the way to escape from Betancuria and end the game. Taking the right hand path leads to the Wilderness Castle. While it is possible to bypass the castle and find a path out of the area, it is recommended that the castle is explored; not only for the loot and XP but also to find a guide to help you return to Betancuria.

The companion from the castle, the ranger Anden Goodmanner, will show you the way from the Wilderness Castle to a barrow, through which is the route to Betancuria - or a foolhardy Princess can try it alone. On the way, there are increasing numbers of wild animals to contend with as well as the barrow itself. After bypassing the broken bridge the journey is fairly linear towards Betancuria. There is an optional side quest to investigate the reason for the odd animal attacks, and then the Dhorn guards at the city gates. If you still have Anden with you he will speak to the Dhorn and they will let you in. If he has been carrying any of your loot, take it back before he heads of to his guild. 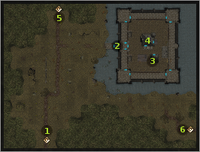 Eventually you'll come across a castle inhabited by bandits. In order to enter the castle (optional), you must knock on the door (#2). Two men will respond and let you into the courtyard. They both show sexual interest and decide to take you to their leader. If you refuse to accompany them, they will become hostile and attack, which could make for a difficult fight since you are greatly outnumbered. If you go with them, the leader will ask his men to take you to the towerhouse and kill you, as he suspects you are a spy. No matter what dialog options you select once inside the castle, you'll be knocked out, stripped of your belongings, and taken to the towerhouse (#3). Upon arriving, you have a brief moment before you're locked up when you can attempt to attack and make your escape. A nearby weapon rack should have a few items to help with the battle. If you wait too long, the men will be able to secure and then sexually assault you, then leave when they're finished.

Once the two men have either left or be dealt with, you're free to explore the castle. Before leaving you may want to free the Mastiff, who's locked in the nearby cage. If you release him, he will accompany you for the remainder of the trip home. He will also show a good deal of interest in your genitalia. When you're ready to continue, sneak out to the courtyard and back into the Castle (#4).

During the day, a number of bandits can be found patrolling the main floor. At night, they might be sleeping. Your belongings can be found on the upper floor, along with the bandit chief and his mate, who are having fun during the day and sleeping at night. Anden Goodmanner, a ranger who's been captured by the bandits, can be found locked in a cell on the lower level of the castle. The key to Anden's cell can be found on the guard outside his cell. Pick the key or kill the bandit and take it. Unlock the door and speak with Anden. He will suggest teaming up and will offer to escort you back to Betancuria, but he'll ask you to help him kill the bandits before leaving. This is optional and is best done at night.

When you're ready to leave, exit the castle and head to the south east, then follow the road into the next area (#6). The road continues east until you reach a small cave-like opening that leads into the Barrows.

Follow Anden's guidance and you will reach an old druidic barrow. He says it is deserted, but it is actually inhabited by goblins.

After traveling through the barrows and some more wilderness with hostile wild animals such as bats and bears (oh my!), you will reach the outskirts of Betancuria. If Anden is in your party, his friend Gail will approach when you make it to the top of a small hill. Following some interesting dialog, she will disappear into the forest. If the Mastiff is in your party, he will eagerly follow Gail and won't be seen again.

Upon entering the city, you and Anden will part company.

Report to Frank in the One Thousand Steps Inn to finish the lesson.

Caron will not be available for conversations after this lesson has been completed.

Continue Chapter 1 of Part One.