A Dance with Rogues
Register
Don't have an account?
Sign In
Advertisement
in: Changed, Spoilers, Quest,
and 4 more

"The Mayor's throwing a big party tonight. Sadly, none of us were invited."

This optional quest can be received from Mando Halley in the hideout (sewers) once the Princess has finished Lesson 4 and Lesson 6.

During this quest the Princess learns that some of Dhorn claims on subjects of morality and sexuality are hypocritical. Either that, or some Dhorn were open enough to embrace some of Betancurian cultural values, following the conquest. It is also discovered that the Dhorn are trying to keep up some of the hierarchy that was in existence before the conquest and that some Betancurian nobles play along.

The quest includes a possible sex scene, but the Princess can avoid it and still finish the quest, without giving an outright refusal, by playing along to a certain point.

This is an optional quest during Part One.

Talk to Mando in the hideout (sewers), who wants you to retrieve a statue from the Mayor's Mansion. Get the Dancer's Dress from Mando and deposit all your other gear - apart from your "special diary" - in the chest next to Mando or any other place you feel comfortable with.

Go to the Mayor's Mansion on the Isle of Men (Betancuria South). The majordomo will allow you in with only the Dancer's Dress and your Special Diary on you. Play along at the dancing scene. Once it is over, talk with the nobleman, Lord Tendenberry, and be nice to him (if you are rude you will be thrown out and the quest is over). You have options (that will affect your options for departing the manor later):

Sneak past the guard at the bottom of the stairs or Bluff (need a skill of 8) him to believe that you have been sent for, and then sneak upstairs. Be careful, as you will be killed on sight if you are caught there! 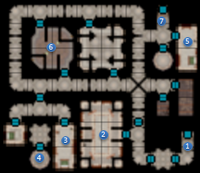 Get the Small Silver Key from the Mayor's desk in the first room (#2) on the west side after entering the upper floor (#1).

While exploring the upper floor, you can steal a nice sword from the Dhorn general who is busy with Evana (#5). Find the Mayor, who is busy on the floor of the library (#6), and grab his key from the floor next to him.

Unlock the Mayor's bedroom (#3) using the Mayor's key and grab the statue from the desk near his bed. As you go through the cabinet and bookshelf in the bedroom, a secret door that leads to a hidden room should appear.

After entering the secret room through the hidden door in the Mayor's bedroom (#3), you'll find a man named Sander Gregory being held against his will (#4). The Mayor believes he's an Incubus since women find him so attractive and thinks Sander will be able to grant him these powers as well.

If you decide to free him, use the Small Silver Key to unlock the door. Sander will then speak with you and join your party for the duration of the escape. Sneak through the corridors to the north east corner of the map and take the stairs up (#7) to the attic.

Use the window (#1) to slip outside and down to the street. A brief conversation will follow and Sander will leave.

There are a few ways for you to make your way out of the mansion:

Now return to Mando for your reward.