A Dance with Rogues
Register
Don't have an account?
Sign In
Advertisement
in: Spoilers, Part Two, Moonville

Moonville is a Dhorn city, far to the north of Westwood and the Black Mountains. Areas of interest include the Castle, the military complex, and the barracks. There is also a small tavern and inn, as well as a temple. Surrounding areas include the farmland in the Lake of Sorrow and the Cult Site in the forest.

Moonville serves as a supply base of Dhorn soldiers based on Isle of Prisoners, thou Moonville denizens prefer not to talk about it. Due to its proximity to the Underdark its population seems to include some drow who fled the Underdark and live in Moonville in disguise.

The Moonville social order and atmosphere is not as rigid as mgiht be expected according to Arto's stories about Dhorn. Local Dhorn seem to be less dogmatic with regard to sex. They also accept women working for their living, running shops, and so forth. Moonville soldiers patrolling the streets are armed with weapons with stunning abilities, and the Moonville Proconsul seems to be opposed to the use of intimidation and torture. It is not clear, though, if Moonville can serve as a true example of existing order in the Dhorn empire, as opposed to the rigid one imposed in occupied territories, or if Moonville is an exception to general Dhorn rule, perhaps due to the liberal attitudes of its leader. 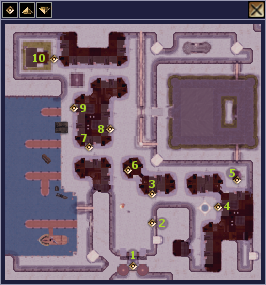