As the Princess exits the Underdark she finds herself in Dhorn territory, near the town of Moonville. During this part of the story the Princess explores Moonville and it's surroundings in an attempt to find a way to get to the Isle of Prisoners located nearby. The Princess investigates the town itself, gets acquainted with it's inhabitants, gains access into the Moonvile Castle and meets cultists who practice carnal rituals and worship a powerful demon named Numinous Belphegor.

During this chapter the Princess finally has a chance to see a real Dhorn society, which in practice is discovered to be much less dogmatic than portrayed by Arto. The Princess also learns that due to a repression of their carnal desires, Dhorn citizens turn to bizarre practices like the Belphegor Cult.

Finally, you've made it through Underdark and can breathe a sigh of relief. Pia feels the same way and she'll strike up a joyous conversation, if she's in your party.

Deepshade Woods forest is a large, but mostly empty map with a handful of friendly forest dwelling animals. Head west until you find the road, then follow the road north until it forks. Enter the nearby cabin and speak with Will Krows. He'll let you know what direction you need to travel. Rest up, head back out, then follow the road north and move on to the Lake of Sorrow.

Just beyond the Forest is the Lake of Sorrow. Although this map is small, the area itself is rather large and encompasses the farmland on the outskirts of Moonville, a major Dhorn city. 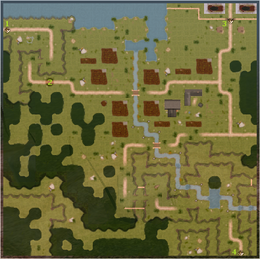 There are a small number of structures in the farmland, but nothing particularly interesting. Follow the path around the corner and down the hill. Rizzen will stop you a short while later (#2), requesting to stay behind as you continue toward Moonville (#3), wanting to avoid any problems due to the distrust of the Drow.

Follow the path east, then turn north at the fork. As you approach the gates of Moonville, a guard will approach and ask what your purpose is. If you're in a relationship with Bran or Vico, they'll speak up on your behalf, otherwise just answer their questions and enter the city.

If you're in a relationship with Vico, you'll feel ill as you make your way down the hill at the start of the farmland, triggering the Pregnant? journal entry, if you have Pia in your party. A brief conversation will follow, but for the moment it's just uncertainty and speculation. 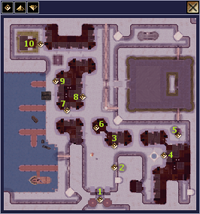 After making your way through Underdark and a quick hike through the farmland of the Lake of Sorrow, you'll find yourself in Moonville. Moonville is a large Dhorn city, and a means of access to the Isle of Prisoners. The main area of interest is the Castle, but it'll take some work to get in.

If Rizzen is in your party, speak with Sioril, the owner of a magic store (#8) in the city. He will offer his help in exchange for Rizzen's head. You have three options:

To get into the castle, you'll need to acquire two keys:

Now make for the sewers and find the drain pipe in the north-eastern corner. Crawl inside and enter the castle.

After acquiring the necessary keys and making your way through the Sewers, you'll find yourself in Moonville Castle's cellars.

The way up from the cellars into the kitchen should be straight forward. Note that you can find some lock picks in the wine cellar. Head into the kitchens and speak with Olver. If you're nice, he'll distract everyone and you can sneak up to the main floor without notice. 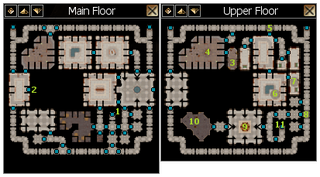 You can explore the main floor for some bonus items. Ultimately you have to go to the door leading into the castle's courtyard (#2), which is located on the far western side. Pick or bash the lock and enter the yard. Climb up the tree and slip through the window. This may take a few attempts.

Once on the upper floor (#3), you'll hear noises coming from the next room (#4). A Dhorn soldier and maid are seen having sex in the library. Once finished, the soldier will leave. The maid turns out to be Trissa, from the Bear Pit. After a brief conversation, exit the library through the door to the north and follow the corridor to the east. Step through the first door (#5) to the south and sneak past the Dhorn, then enter the room further to the south (#6). Here you will encounter the Proconsul of Moonville and witness a discussion about a pisoner currently being interrogated, but without much success. You can also pick pocket the Proconsul's Sword and sell it later for extra cash. When you're ready, pick the lock of the door to the east and unlock the desk to get the Proconsul's key (#7). Leave the rooms full of Dhorn and follow the outer corridor to the east again. Turn south until you reach a heavily guarded gate (#8). Unlock the gate with the key and enter the prison. Head through the portal room (#9), sneak past a few more guards, and enter the cells (#10). A rather odd man named Jachan Krows has been locked up. Speak with, then free him. Before running off, he'll give you a coin and invite you to the temple found in the forest of the Lake of Sorrow. Follow his escape route, through the door down stairs (#11) that's just a few rooms to the east of his cell. Make your way down the stairs and through the tunnel. You'll find yourself back in the Military Complex. Exit the complex, regroup with your party, then leave Moonville and head out into the farmland.

Lake of Sorrow, after Moonville[] 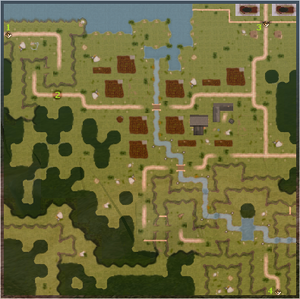 If Rizzen is in your party, he'll wait (#2) in the Farmlands while you explore Moonville (#3).

After you're done with Moonville, and if he's still alive, you should pick him up before continuing. If you're not in a relationship, you should stumble as you make your way up the hill in the farmland (toward the forest). He'll help you up and will begin to think of you as more than just a slave. This is the beginning of his relationship, if you choose to pursue it.

After finishing up in Moonville and meeting Jachan Krows, you should make your way to the forest (#4). Follow the road until you reach the temple, then unlock the trap door and head down. You can't do much exploration at this time, so just make your way toward the portal. When you get close, you'll have a conversation with your party. Upon entering the portal, you'll find yourself alone in the upper levels of the Cult Site.

After entering the portal in the temple found in the forest, you'll find yourself alone on the upper level of the Cult Site. Open the door and follow the hallway to the second door. When opened, a cult member will question you. Mention Jachan's name and you'll be allowed in. Clothing is not allowed in the temple, but you don't necessarily have to dump all of your clothes and armor in the storage area, nor is it mandatory to dump items such as belts, boots, amulets or rings, which will prove very useful in the future. Strip naked, then continue into the temple. Before heading downstairs, a member will offer you a vial of liquid to drink. The choice is yours.

The lower level has a large room surrounded by a few bedrooms. You can speak to and participate in the events of the surrounding rooms, but you must speak with the high priest in the main room to advance the story. Depending on your dialog choices, you can either participate in the main event, or be a spectator. If you participate, you'll face four Karmanthi, which you must either fight or appease in a sexual manner. The vial of liquid turns out to be an aphrodisiac, which greatly improves your ability to handle the latter. If you spectate, you can allow the events to proceed without interruption, or step in and put an end to them in a violent manner. Regardless of your choice, a demon named Numinous Belphegor will appear and briefly question you, then send you to the Isle of Prisoners and on to Chapter 5.