Westwood is a fairly small town compared to Betancuria and is about a weeks travel away by boat. There are a number of structures in Westwood, but they are dwarfed by the Castle. The castle can be found toward the north of the city and the harbor to the south, the remaining areas are divided into the east and westsides. The eastside was primarily housing and west commercial, up to a few weeks before the Princes arrives in town.

The Dhorn had been trying to establish a presence in the town for some months, Baron Westwood got increasing unhappy with their persistence and eventually had the emissaries killed, the Dhorn were most displeased and invaded the town apparently killing all the Barons family and most of the population, there is a rumour that the Baron is in the castle dungeons. There are an increasing number of Dhorn settlers in the town.

Much of the eastern district received severe damage during the invasion. The only usable structures remaining are The Three-headed Orc Tavern, a building retooled by the Dhorn as a Barracks, and a small number of houses, some now abandoned. The western district escaped any serious damage, although the owner of the Alchemist shop was killed and the business later taken over by a Dhorn settler. The Westwood Inn is no longer in use and has fallen into disrepair. The Blue Swan has been turned into a gambling house to entertain the garrison.

The castle itself is a large imposing building, but apparently not impervious to the Dhorn attack. It has some nice gardens laid out in front of the main entrance, the only thing that detracts from the beauty is the crumbling Greytower, which is marked with warning sign advising people of the danger of the buildings collapse. For some reason the Baron seemed reluctant to order its demolition, rumours in the town say it is haunted.

Apart from the harbour entrance, the only way in or out is the great city gates to the north east. The farmland lies outside the city, providing much of the towns food and housing the cemetery. 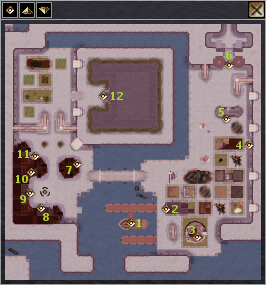